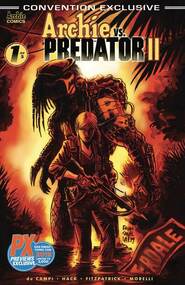 SDCC 2019 ARCHIE VS PREDATOR 2 #1
Betty, Veronica, and Predator-Archie have been left in the wreckage of their town, all their friends dead. Normally, they’d just go down Memory Lane and get home again where everything’s okay, but that’s no longer an option. It isn’t until they find an undamaged car and drive it down a different road where they can finally return to Riverdale-but their hometown feels different. And it’s made even more bizarre when they come face-to-face with a few people they’d never expect: themselves. Only different, newer versions. Little do they know, Predators on Mars are watching them, planning their next attack. Limited to 3,000 copies.
​BUY NOW : $16.99 FREE SHIPPING ​​ 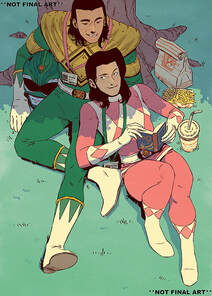 SDCC 2019 MIGHTY MORPHIN POWER RANGERS #40
Last year, Shattered Grid made comic book history-this year NECESSARY EVIL changes what you think you know about the Power Rangers with a reveal that will have everyone talking! The Power Rangers comic book event of 2019 begins here with the first appearance of the Power Ranger everyone’s been asking about-the fan favorite White Ranger! The all-new team of creators from record breaking Power Rangers; Shattered Grid; Ryan Parrot and Daniele Di Nicuolo present the return of the Mighty Morphin Power Rangers-but what happened to the universe after the defeat of Lord Drakkon, and what do our Rangers remember?  Limited to 3,000 copies.
BUY NOW : $16.99 FREE SHIPPING 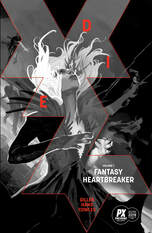 SDCC 2019 DIE TP VOL 01 FANTASY HEARTBREAKER
THE WICKED + THE DIVINE writer Kieron Gillen teams up with artist supernova STEPHANIE HANS (THE WICKED + THE DIVINE, Journey Into Mystery) for her first ongoing comic! DIE is a pitch-black fantasy where a group of forty-something adults have to deal with the returning, unearthly horror they only just survived as teenage role-players. If Kieron’s in a rush, he describes it as “Goth Jumanji”, but that’s only the tip of this critically acclaimed obsidian iceberg. Collects DIE #1-5.  Limited to 1,500 copies.
​​ORDER NOW : $98.89 FREE SHIPPING
​
SDCC 2019 AMAZING SPIDER-MAN #25
Year two of Nick Spencer, Ryan Ottley and Humberto Ramos’ run on ASM begins here! In the giant-sized main story, Spider-Man and Mary Jane find themselves in an INCREDIBLY tough situation, thanks to Electro. Can Spidey save MJ? CAN MJ SAVE SPIDEY? What is Mysterio cooking, and what does it have to do with the bandaged villain who has been on the periphery since #1?! All this, plus a story by Dan Hipp (TEEN TITANS GO! Art Director), internet sensation Keaton Patti and MORE!  Limited to 4,000 copies.
BUY NOW : $16.99 FREE SHIPPING
​SDCC 2019 IMMORTAL HULK #20
Bruce Banner is being hunted on two fronts by two dead loved ones turned nightmarish, implacable foes. The stage is set for a brutal three-way confrontation between the ABOMINATION… the HARPY …and the IMMORTAL HULK. (FEB198949) Limited to 4,000 copies.
BUY NOW : $16.99 FREE SHIPPING
SDCC 2019 STAR WARS #68
REBELS AND ROGUES! “The evil lord Darth Vader, obsessed with finding young Skywalker, has dispatched thousands of remote probes into the far reaches of space…” That’s right – you remember the opening titles of The Empire Strikes Back. Now find out what happened just before, as Luke and his friends launch a desperate, three-pronged mission of deception to keep the Empire from finding their new rebel base in a brand-new epic from the new ongoing team of Greg “PLANET HULK” Pak and Phil “POE DAMERON” Noto! Featuring Han and Leia undercover in a noir world of romance and danger! Luke and R2 facing off against the Executor in a single X-Wing! And Chewie and Threepio, the greatest team-up you never knew you always needed!  Limited to 4,000 copies.
​​BUY NOW : $16.99 FREE SHIPPING
SDCC 2019 SYMBIOTE SPIDER-MAN #4
PETER DAVID and GREG LAND continue their tale that takes place during the original Alien Costume Saga! Mysterio finds himself in possession of a sliver of the black costume, unaware of its true nature… Then, tensions continue to mount between Peter Parker, A.K.A. SPIDER-MAN, and his girlfriend, Felicia Hardy, A.K.A. THE BLACK CAT, as she’s been keeping something from him – something that threatens to tear apart their relationship!  Limited to 4,000 copies.
BUY NOW : $16.99 FREE SHIPPING
SDCC 2019 VENOM #16
After weeks on the run and battling the monsters of Asgard through the WAR OF THE REALMS, Eddie Brock finally has a moment to catch his breath. But without his symbiote, getting even the basic necessities will become a challenge for Eddie Brock. Which means that keeping his son, Dylan, alive will be too!  Limited to 4,000 copies.
BUY NOW : $16.99 FREE SHIPPING
ALL SDCC 2019 EXCLUSIVES SHIP AFTER JULY 22ND
CLICK HERE TO PAY WITH VENMO    or    CLICK HERE TO PAY WITH CASHAPP
EMAIL US AT NERDVANIA3000@GMAIL.COM TO PAY WITH BITCOIN OR OTHER CRYPTOCURRENCY ​​​​
​​​
​Please note : All preorders come with a money back guarantee if we are unable to obtain your item. Some glam shots for exclusives may not be the final product and some details may changes. Stickers are not guaranteed, some items do not even have a sticker. ​ALL SDCC 2019 EXCLUSIVES SHIP AFTER JULY 22ND